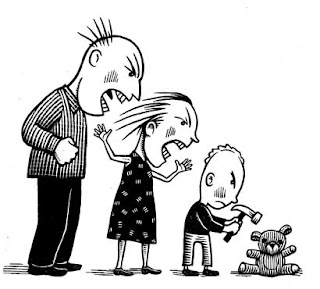 Today is National Spank-out Day, the final day of a full month devoted to Child Abuse Prevention. How many public service announcements have you seen/heard about this? I have not seen or heard any! I have encountered many messages for the protection of animals and the environment, to help orphans in Africa, to support breast cancer research, but none directed to the general public that proclaim the damage that hitting children causes to them and for ALL OF US. There is a very clear picture of all the ramifications that hitting children causes.

I believe in "doing small things with great love" (thank you, Mother Theresa), and that every little bit counts. You know, a pebble thrown in the water creates far-reaching ripples, that kind of philosophy. So I support all the above-noted causes in whatever small (or big) ways I can. But I am amazed at how blind people are to the dire ramifications of hitting children. Where is the public outcry for this?! Where are all the support ribbons on the cars? I'm just not seeing it.

What I do see is a more violent, angry world than the one in which I grew up. I see a world where people feel the need to carry concealed weapons to work. I see a world where families are so disconnected that teenagers are sent to boot camps where they are further abused and sometimes killed. Can anyone really deny that we are perpetuating and endorsing the lesson of "might makes right" when we rule over our children using physical punishment?

I think one of the things that prevents people from seeing the truth in this matter, is that it calls for many of us to admit what being hit has done to us. I've hear many say, "I was hit as a child, and it didn't damage me." Really? Do you remember how you felt being hit? It didn't bother you at all? You weren't physically hurting, afraid, confused, angry? Nothing? If you were hit by your parents, most likely you weren't given an opportunity to convey all your feelings about it to the perpetrator. So where did those feelings go? Did you suppress your feelings, believing the lie that your feelings were insignificant, allowing others to abuse you in the future ? Did you act aggressively to peers or those smaller than you, because you could? Did you keep a stiff upper lip, and know that your day would come, the day when you would be in charge, and you would be the one doing the hitting?

When an act of violence is committed against someone, there has to be an effect. It requires self-examination to determine what that effect is. It requires an honest appraisal of the beliefs we have had since our childhood and of how they impact our behavior and choices today. That is too unnerving for some people. The problem is that we cannot solve problems with the same tactics that caused them in the first place, and that by ignoring this we suffer the consequences reflected in our present day society. When we are so practiced at denying our own pain, it becomes easy to act as if it doesn't affect us when we cause our own children pain. And if we can do that, it is even easier to ignore others' children who are suffering.

It's time to give up the delusions that violence towards others is acceptable if the "others" are young enough. It's time to learn that self-control is better than attempting to control others, and it is best learned through example. It's time to speak up against violence toward children in your corner of the world. Let people know of the alternatives. Show them by your example. Offer your assistance to those at risk for hitting/being hit. Do your small part however you feel led. Spread the word: love, compassion, understanding can do more to heal our broken world than "spanking" ever could.

Now that you mention it, I haven't seen any PSAs for either abuse prevention month or Spank Out Day!

Our priorities are truly amazing sometimes. Maybe "appalling" would be a better word.

You are so right! I'm going to my blog right now and sending a link here. I didn't even know it was Spank-Out Day--spread the word!!

I haven't seen any PSAs either. I didn't even know it was abuse prevention month and now the month is over. I just can't even imagine hitting a child.

I didn't see any announcements either, I posted about the month when I saw you post it.

Well the day is over, I don't spank obviously but so many do and think it's ok, it's sad and it's abuse.

Last year was the first year I heard about Spank-out day, and I'm glad that I could help spread the word! Thank you all for commenting here, and for helping me to get the word out. :)